Bean, an odd kitten, was discovered last year in an abandoned trailer park. His body was riddled with wounds, and he had a slew of health issues. Her life was rescued and she was cared for by an animal sanctuary.

Francisca from Germany decided to adopt a cat after moving into her new house, and she fell in love with tiny Bean right away. The gray feline was relocated to the adoption floor after no one seemed to be interested in her when she was in “Lost and Found.” She sat there, patiently waiting for someone to take her home.

“She looked so unique and adorable that I knew I wanted to meet her.”

Kitten is misunderstood because of her gloomy expression, but she eventually finds family.

After some time had passed, Francisca noticed a post about the kitten on the shelter’s Facebook page.

“I wrote to the shelter and received a call asking if I was certain that Bean was the cat I wanted to see because no one else was. I sobbed because I thought no one wanted her. So I scheduled a meeting with them since I was even more desperate to meet her.”

Francisca was taken aback when he finally met her; she expected a cat weighing more than 20 pounds, but Bean was a little kitten with large, lovely eyes. Bean raced to rub his face over Francisca’s as soon as she entered the room, and their relationship was immediate.

“It was much better than I could have hoped for. It was a baby of around 3-4 years old. Tears streamed down my face, rubbing against my leg.”

Francisca stayed with Bean in the shelter for hours that day because she couldn’t stand the thought of leaving her there for another night. Bean, too, fell passionately in love with her and refused to leave her side for a moment.

That day marked the beginning of a new chapter in the feline’s life, as she finally returned home to the family of her dreams.

From the first second, he felt at ease. He sat on the couch and napped as if it were the most pleasant thing he had ever experienced. He didn’t start investigating till after that. I was overjoyed and glad that he had returned home.

For the first several weeks, Little Bean was always by her mother’s side, as if she was terrified her human would abandon her. She gradually understood she was at home, and that her new mother would never abandon her to her fate.

“That’s when she decided to unleash her (inner) diva, her ‘queen of the home’ mindset.” 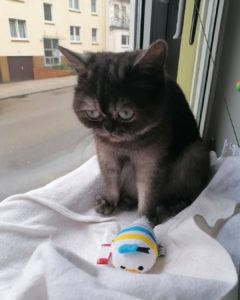 According to her mother, Bean is a really lovely kid, and her gloomy look has nothing to do with her loving and clinging disposition.

“When I work from home, she spends the entire day in front of the computer, despite the fact that her preferred location is elsewhere. When I go to work, he climbs on the window and stares at me till he can’t see me anymore. 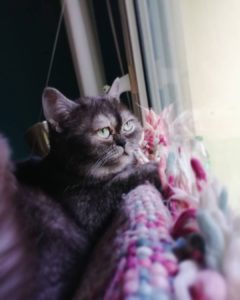 Sweet Bean has a favorite toy, a duck, which she frequently carries with her everywhere she goes. She enjoys sitting at the window and admiring the scenery, as well as going on walks with her mother. She is very lively and is always looking for ways to show her affection to her family.

I’d never encountered a cat like her before. She’s a diva with a fiery personality, but she’s also adorably gorgeous. He enjoys yelling at birds and the Amazon delivery man (not other postal services). 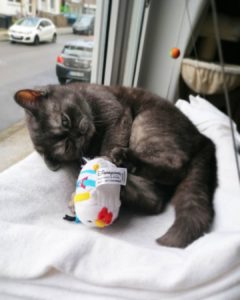 Bean is his mother’s tiny shadow while she is at home; he never leaves her side and always seeks her caresses. Her mother is relieved to have her home and to know that she is content with her.

She is both my entire universe and a weirdo. I can’t express how much I adore her. The rescue works in both directions. It comes in handy on bad days. He’s been through a lot, but now he’s home and receiving the love he deserves. I can’t see my life without her. It’s very unique and wonderful. I’m overjoyed that he picked me to be his mommy. 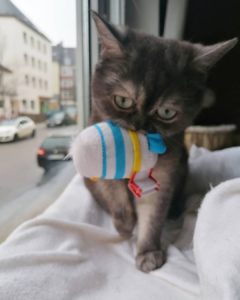